Behind The Scenes of Weezer's Toto 'Africa' Video Clip Shoot

Blackmagic Design create some of the world’s finest tools for filmmaking, post-production and TV broadcast. If you're a filmmaker, you've most likely lusted after one of their cameras before. We know we have.

They are also a premier partner for this year's My RØDE Reel - their URSA Mini Pro and Pocket Cinema Camera 4k and other incredible products are some of the coolest prizes in this year's comp.

Below is a chat with Jade Ehlers from Crush Music, one half of the direction team behind the music video for Weezer's cover of Toto's Africa - a recreation of their 1994 video for Sweater Song that starred none other than Weird Al Yankovic and was shot using Blackmagic RAW and the URSA Mini Pro. Jade chats about how the video came together, the challenges they faced shooting a one-take video, and how Blackmagic saved the day in post-production. 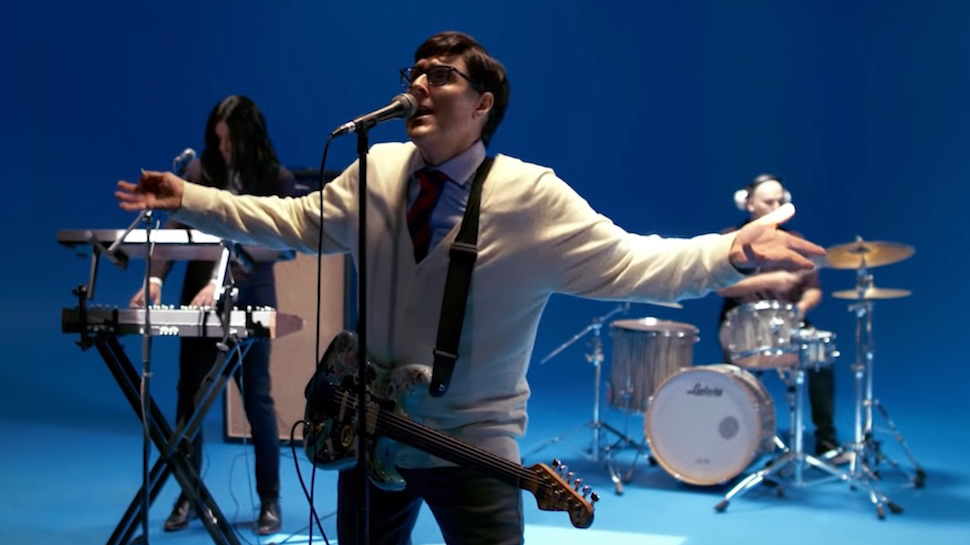 How did you get involved in the project?

Brendan and I both work at Crush, their management company, and oversee the creative for Weezer. So, when the time came that we needed to make a video, we just pitched an idea we came up with to the band and reached out to Al ("Weird Al" Yankovic) and everything just came together.

How did the idea come about to recreate the Sweater Song music video?

The original idea was jokingly to have Weird Al recreate the Flashdance song, but after reaching out, he's the one that pitched doing the Sweater Song and dressing up as Rivers [Cuomo].

How do you approach working with artists that already have an established style – do you find it a more collaborative process, or do you find yourselves working around their vision?

Directing and creating for/with any artist is really just making sure their brand and vision come through. So as long as you’re looking out for that the whole time, it’s usually an easy process. I’ve found it gets hard when people have other agendas on the plate.

Especially on this shoot, Weezer was up for the idea since it rooted from Al, and they were just stoked to have him part of the concept. It was more collaboration with Al after that, with what "era" of the band we wanted to dress him in. Also, our budget was 1/10th of what the original Sweater Song video was, so we had to figure beats to keep the energy. Luckily enough, Al threw his wiggles in there and that was plenty!

When it came to pre-production, what was involved and how was this different from other shoots?

This was pretty standard production, and the only difference was working with such a big name like Al, we had to do some extra fittings to make sure the wigs fit properly. We ended up going through two different wigs to get the right one. So, I have to say, I learned quite a bit about wigs on this one.

Both this and the original Sweater Song music video are known for being all one-take. How do you approach a shoot like this and what are some of the challenges you faced?

There is actually one cut in both videos when it comes from the hallway into the studio, so for us to do it similar, we had to build a hallway out of flats to give us a similar path as the original video. One-takes are really fun, honestly, some of my favorites because they take away that safety net of editing, so you just have to really make sure the beats are hitting in the right moments and interesting movements are happening to keep your viewer engaged.

Once we decided on Sweater Song, Brendan and I went through and broke down all the beats and made an arc for the lighting of the reveal of Al's accordion, etc. The biggest challenge we faced was lighting; because of budget constraints, we couldn't trigger the lights, so we had to have our grip/electric/PAs on walkies controlling different lights on dimmers by hand. That took a while to get everyone on the same page because two people were controlling four lights where one person was hiding in a corner, not in eye sight of the stage or other lighting guys. So, we had to radio him “On!” and “Off!" at the right times over the music, which was quite hard! Also, our back wall lights had a delay when turning back on once dimmed off, so we ended up having to get ND sheets and wrap the bulbs so the lowest lighting before it turned off looked off.

How many takes did it take to get it right?

We actually shot this in three takes. I just remember Al killing it, and after the song ended and I yelled "Cut," he comes up and says, "That's the one," and started undoing his shirt and said, "I don’t think I’ll be able to beat that performance." Then we called it, wrapping the shoot four hours early!

How much of a difference did shooting with Blackmagic RAW make in terms of post-production?

Honestly, due to our lighting issues, Blackmagic RAW saved us because we could change the ISO in post. I exported the take three times in 400 ISO / 800 / 1600 and did cross dissolves in different parts to fade the right exposures.

Was it a one camera operation or were there multiple units for the shoot?

What’s one piece of advice you would give filmmakers just starting out and considering directing a music video themselves?

My biggest advice would be to know you can't do everything yourself and to build a team that you trust and enjoy working with! Then just start creating and collaborating! I did so many videos where I did most it by myself, and those were some of the worst videos because I spread myself so thin. Everyone has a role on set for a reason, and you don’t need to be the best at it all.

The Music Video category of My RØDE Reel always brings in some incredible entries (check out Sound of Science from back in 2016!). If you're thinking of entering My RØDE Reel, get cracking! Entries close August 28th. Submit your film here.

Introducing the Winners of My RØDE Reel 2021

How To Connect An External Microphone To A Smartphone